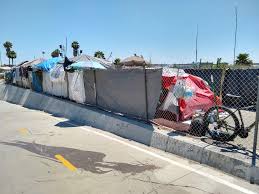 Today, unsheltered homeless and advocates gather to protest city policy on outdoor sleeping. Police practices in Phoenix stand at odds with a court ruling on the matter.

Police officers in the city of Phoenix regularly enforce an urban camping ordinance. In practice, it forces homeless individuals to vacate areas in which they’ve established outdoor living arrangements. Police drive by once and tell everyone to leave. Then, usually, shortly after, they return and request IDs. In effect, the enforcement criminalizes homelessness. In fact, in several cases, it leads to arrest and jail time.

However, a pertinent legal case, Martin v. Boise, changed the framing of illegal encampments with its ruling a decade ago. In it, a court ruled that police harassment of the homeless was illegal when insufficient sleeping facilities were provided. Essentially, if a city failed to provide shelter for its homeless, they couldn’t force them off the street.

A 9th-Circuit panel upheld the decision, resulting in an appeal by the city of Boise, as well as other municipalities. However, the Supreme Court denied hearing the case, thereby ensuring the ruling stands.

The homeless population surged to over 3,000 in the county of Maricopa last year.

A lack of affordable housing combined with limited shelter space exacerbates the issue. While city officials express desires to solve the crisis, efforts fail to match its pace. Recent funding towards a strategy to unite the homeless with facilities appears either inadequate or under-managed.

In the meanwhile, advocates hope the city restructures policies regarding homeless encampments as well as the seizure of belongings from people living on the streets.