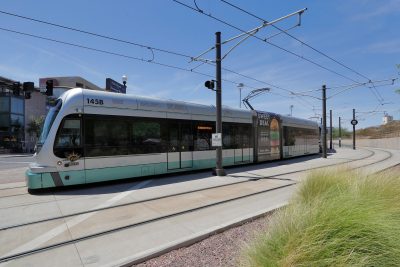 A city in Arizona that is Phoenix has been given a $49.9 million grant to fund Phase II of the Northwest Light Rail Extension project. In fact, Phoenix will also receive a second grant of $1 million to pay for planning on the same project. Mayor Kate Gallego made the announcement on Monday.

Moreover, this light rail is essential to what is being described as smart growth and smart development throughout the city. Extending these advantages to commuters in northwest Phoenix is what the grants do. Gallego said that she is deeply grateful to its federal partners because they share the city’s vision and for the funds that will bring it to life.

There is an allocation of $49.4 million in Capital Investment Grants (CIG). The Federal Transit Administration (FTA) was told the city about it last week. A discretionary grant program that funds transit capital investments including heavy rail, light rail, streetcars, and bus rapid transit is what CIG is as described. In fact, this allocation marks another stage in the project’s progress. Moreover, it goes towards preparedness to receive a construction grant agreement under the CIG program.


The $49.4 million was applauded by Arizona Senators Kyrsten Sinema and Mark Kelly. This money came from the U.S. Department of Transportation and went to help fund Valley Metro’s Northwest Light Rail Extension.

A critical step in the funding announcement represents the next phase in the Northwest Light Rail Extension, said Sinema. It’s about putting the investment in Arizona’s infrastructure creates jobs, expands transportation areas, and create growth within Arizona’s economy. I want to further support the infrastructure investment in our state and generate opportunities for all Arizonans.

Adding an extra 1.6 miles to the light rail line that presently ends at 19th Avenue and Dunlap is for the Northwest Extension Phase II. It will run west on Dunlap to 25th Avenue. Then, it will go north to Mountain View Road. And from there, an inline structure will bring the rail over Interstate 17 to its final stop near Metrocenter Mall.

It seems there was more good news earlier in December. This is when the FTA also awarded Phoenix a $1 million Transit Oriented Development (TOD) planning grant. This is also for the Northwest Extension Phase II. Moreover, these money will go toward producing an Active Transportation Implementation Plan and a TOD Policy Plan for the area.