Time to Examine Scooters for Their Eco Impact 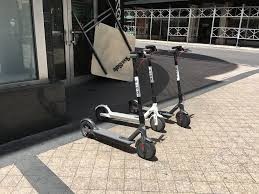 Corporations sell the concept of e-scooters to consumers as a fun, sporting alternative to walking, driving, or even Ubering. Plus, they also pitch them as a brisk, cheap way to move from point A to point B. And these companies like Lime and Bird emphasize the scooters’ sustainability in last-mile transit. This notion is proving super effective.

National Association of City Transportation Officials say people took 38.5 million rides on e-scooters in 2018. When they scrutinized these numbers, it showed that in excess of 40 percent of the 84 million rides taken in the micro-mobility space (electric bicycles, electric skateboards, and shared bicycles) were done on e-scooters.

Going further in-depth, the Portland Bureau of Transportation (PBOT) demonstrates that a third of those substituted for car rides. People took another third of the them merely for enjoyment. In fact, a whopping six percent of users say they dumped their cars in favor of scooters. Even more surprising, an additional 16 percent say they have considered getting rid of their car.

All of these figures seem to point to a healthy environmental future. But it’s not exactly true. In fact, North Carolina State University Environmental Engineering Professor Jeremiah Johnson and two students, Joseph Hollingsworth and Brenna Copeland, discovered in a 2019 study that e-scooters’ eco footprint was worse than the modes of transportation they’re supposed to replace.

The transportation world produces around one-third of the nation’s greenhouse gas emissions. And scooter companies like Bird and Lime brag about their carbon free rides. In order to make up for their use of non-renewable energy with battery charging and in the redistribution of the e-scooters, the companies buy renewable energy credits or then participate in carbon offshoot endeavors.

Scooter companies construct their parts from smelters, factories, and born from mines. This means all the energy and emissions used to get and craft the steel, aluminum and electric motor comprised more than half of the scooters’ environmental footprint. The rest of their impact comes from the vehicles that pick-up and charge and redistribute the scooters.

The second part of their eco impact, drivers going to pick up the scooters, is particularly bad as often the drivers roam all over the place to locate the scooters.

So what do you all think? How do we lessen these vehicles eco-influence?