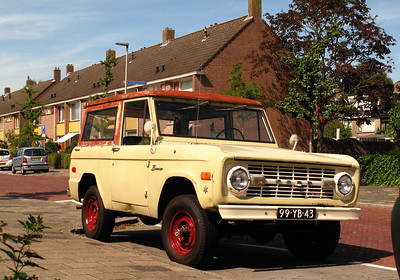 The Ford Bronco is one of the most iconic mid-sized SUVs to hit the market. From the gas-guzzling early 90s, the vehicle has made it apparent that it is nothing to mess with.

Well now that photos have been leaked, the Bronco looks at making a huge comeback.

A total redesign is looking to bring the Ford Bronco back into the limelight. With an all-new layout, the SUV will have different modes. From off-roading to street driving to even responding to the music you are listening to, the new Bronco has it all.

When you think about engines, a big V8 or a straight 6 usually comes to mind. Well now that technology has improved for both fuel efficiency and engine size, the new Bronco looks to be sporting small 2.8 or 2.8 liter V6. This allows for optimal efficiency without breaking the bank when fueling. As for the tank size, we’re guessing that it might be a little larger than normal.

Along with the features that allow for multiple different driving modes at the flip of a switch, the thought of a manual transmission could also be a solid move on Ford’s part.

Having this transmission will put the Ford Bronco in the same spots as the Jeep Wrangler. The concept of manual transmissions lends to the off-road capabilities for those looking to get their new SUV a little dirty.

The dates for the release are looking like 2022 due to COVID-19. Next year’s production looks to be a huge seller in the mid-sized SUV market. Providing an SUV that is all-around, fuel-efficient, and coming in at $30k is affordable to most buyers.

We can’t wait to get our hands on one next year. In the meantime, we can sit at our desks. We can imagine how cool it would be to drive one of these bad boys around town.