Chevy Nova: Getting A Remake? 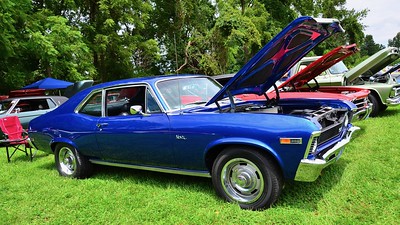 The Chevy Nova has been a staple is compact, affordable power. Next to many other muscle cars, the vehicle went through many remakes. Among the most notable were the 68-74-years of the vehicle. Then the vehicle went into a downturn through the ’80s. Now, the vehicle has been reimagining with a brand new body and clean features.

I remember the first time I witnessed how cool a muscle car looked. It was my then girlfriends father 69 Nova that he would race. The car was tricked out. A full SS engine with twin nitro tanks and a solid roll-cage, this was meant for speed. It was cool.

Now, a remake, following the likes of the Camaro, Challenger, and Mustang has surfaced.

Take a look at that. The original vehicle was nothing to laugh at, but this new re imagining of it keeps all the classic features. Not only that, but it gives it the remake that most major muscle cars have had. Sleek, stylish and new with the same power the original had.

Needless to say we here love it. As for its release, well, that won’t likely happen.

The Nova Is Just A Concept

While it looks perfect, this is simply a concept. For the future, it doesn’t seem like this will see the light of day. From a global pandemic to the shifting demands of consumers, it is highly unlikely that this new revamp will hit the road.

The consumer market has veered away from high-powered gas guzzling war machines to more effective methods. Many are switching to electric with Tesla and the Prius as well as finding other forms of transportation.

This is working so-much-so, that even Chevy is looking to either put a halt on production or completely close on their Camaro line. For now, we simply get to look and speculate what it would be to get behind the wheel of one of histories most iconic redesigns.